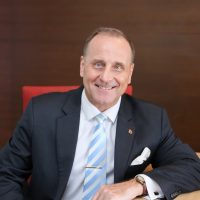 Mr. Andrew Langston is a British national with over 35 years of experience in hospitality management and development. After a long career as both General and Regional Manager with InterContinental Hotels, he moved to Banyan Tree Hotels & Resorts, where he became Vice President, responsible for all hotel operations in the Asia Pacific region and business development. Following this he accepted the role of Executive Vice President, Asset Management and Strategic Advisory for Jones Lang LaSalle based in Bangkok. He has now joined Centara Hotels & Resorts as Global Senior Vice President Business Development.

Born in Marlow, England, Mr. Langston initially trained at Thanet Technical College in Kent before moving to London.  His talents in the service industry were honed at the highest level early on in his career when he had the privilege of working for the British Royal Family base at Buckingham Palace, a role which included looking after Her Majesty Queen, Prince Charles, Diana the Princess of Wales and Prince William, among others.

His international career began when he relocated to Australia, and since then he has worked in no less than ten countries.